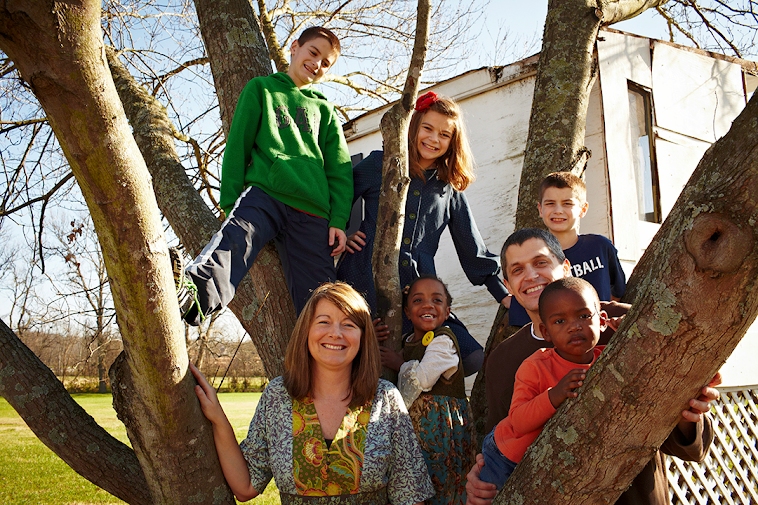 I will admit that I woke up even more excited on Thursday than I had been the day before. You see, Hollywood Studios (AKA MGM) is my FAVORITE park. I'm not sure why other than the first two trips to Disney (that I actually remember) both involve magical memories at MGM. I will never forget my first experience on Tower of Terror or seeing that wonderful Ms. Piggy fountain by the Muppets. I LOVE THIS PARK! Here's Jonathan and I before we headed to breakfast: 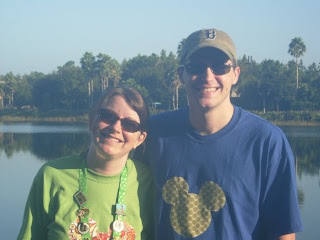 I should also take a minute to give a big shout out to Aunt Ali who made us ALL matching Mickey Mouse shirts (see ours in above pic) She was so generous in doing this for all of us and I can't even begin to tell you how many compliments we got on the shirts throughout the day (even from people who WORKED at Disney) It also made it very easy to spot everyone in our big ole group.

We had decided that it would be best for everyone in our group to do breakfast on your own and meet at the bus stop at 9am to head to Hollywood Studios. We opted to do a simple breakfast using our snack credits on the dining plan. We did cereal, muffins, etc. which was fine since we had a big lunch planned.

Here's our group as we got to Hollywood Studios. Notice all the adorable Mickey shirts. 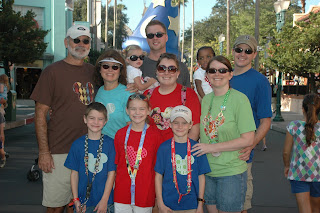 We immmediately headed towards Tower of Terror. We didn't get far though because we kept popping in and out of gift shops and that is when I found THE Princess Tiana costume. It was simply stunning and I KNEW I had to have it for Mary Elizabeth. We had the costume delivered back to the hotel as I didn't want to lug it around all day.

We got to Tower of Terror and Uncle Josh, Papa Eddie, Jonathan, me, Isaac and Luke decided we wanted to ride. I was giddy with excitement and even more excited that Uncle Josh had never rode on it before. The line wasn't long at all and before you knew it, we were heading up in the elevator. We had a blast and then headed back to meet our crew. After we met up, we decided to do Rock n Roller Coaster. This time it was me, Uncle Josh, Jonathan, Anna, Isaac and Luke. I was really excited because even though this was my third time to Disney in three years, both times before this ride had been closed. It definitely met my expectations and has definitely been moved to the top of the list of my favorite rides. 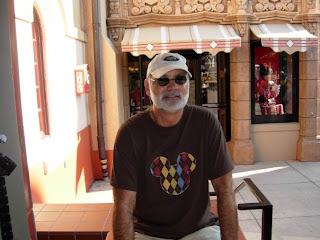 Here's the actress who fell in LOVE posing with Anna: 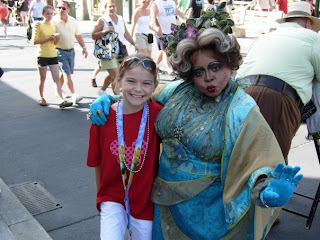 She told Papa Eddie she instantly knew he was from Tennessee because he was the only "ten I see!" The street actors and actresses are top notch at Hollywood Studios and I've decided that would be one of my dream jobs. Dressing up, taking on a different persona and talking to tourists all day (especially picking on them and cracking jokes).

We then headed over to the Playhouse Disney area and decided to see the show. It featured Little Einsteins, Pooh and Friends, and Mickey Mouse Clubhouse. This was probably Mary Elizabeth's favorite part of the trip. You sat criss cross applesauce on the floor and all the characters were puppets (which was just fine with Ms. I'm scared of anything full sized in a costume) and the music was loud. Lots of kids sang and danced along and Mary clapped a few times with excitement. Here's Aunt Ali and Maggie enjoying the show followed by a pic of the stage: 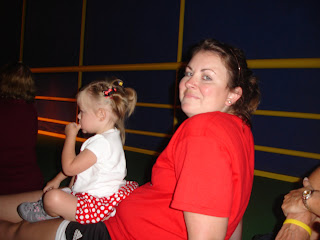 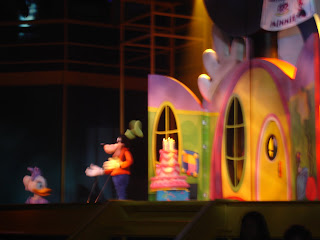 Now it was time to eat (again!) so we headed to our sit down meal of the day on our dining plan: italian food at Mama Melrose's. We had decided this would be our BIG meal of the day and I must say, it hit the spot. I got the tomato and mozzarella salad (aka caprese salad) and a ceasar salad. It was SUPER yummy and our service was awesome. This was one of the few sit down dining places where we didn't have to wait past our reservation, which was extra nice considering it was about 3 degrees cooler than hell outside.

After lunch, we headed to the Muppet store gift shop where the kids traded pins and we browsed around. Anna also purchased her first (and I think only) souvenir. Mom and dad decided to split off and head back to the pool. Ali, Uncle Josh, Maggie, and our entire family decided it was time for TOY STORY MANIA. Not only did we have a great time, but my boys enjoyed it so much they are now asking for this game for their Wii from Santa. From there, my family split from Ali's family and we headed to the animation place near Playhouse Disney. We waited inline, watched the awesome movie at animation at Disney, and then got a sneak peek at lots of memorabilia from The Princess and the Frog movie that is coming out December 11. As we walked out from this area, we noticed that their was an animation class and some character spots. We decided to stand in line to meet Mickey. We were a little unsure at how this would go since (as mentioned before) Mary Elizabeth was NOT A FAN of anything life sized and in costume but she did surprisingly well. Here's a few pics: 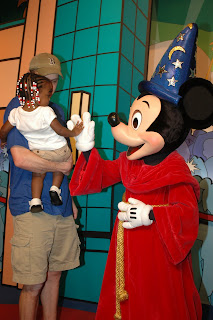 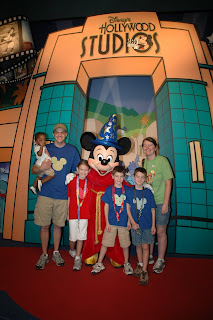 After Mickey, we decided it was time to head back. I stopped at guest services as the clerk from the store with the Tiana costume had accidentally kept my debit card (which I noticed and freaked about over lunch), so I had to go there and claim it. As we were approaching the guest services, the sky opened up and it POURED. We put on our Walmart ponchos that mom had bought for everyone before the trip, headed to guest services and hung out there for a while during the monsoon that occurred outside. The kids traded pins, we chatted with an awesome cast member named Les, and then finally decided to brave the rain and make a run for the buses. While we were waiting for the buses, Aunt Ali and her crew walked up so we were able to ride back to Coronado with them. We got back to the hotel and decided as a group we would do Downtown Disney. We decided to meet at the bus stop after everyone had time to freshen up.

UP NEXT: Downtown Disney
Posted by Brea at 3:54 PM

Another great post! These Disney posts are all so much FUN to read and think back on our great trip! LU, Mom

Thanks for the shout out sis! I loved the shirts so much that I will still wear mine and hopefully others will to. They were a ton of fun to make...especially for my favorite people. Awesome post again! Love it!

I loooooooove Tower of Terror. Love it.

Bet Mary Elizabeth loved the Princess Tiana costume! Has she worn it yet?